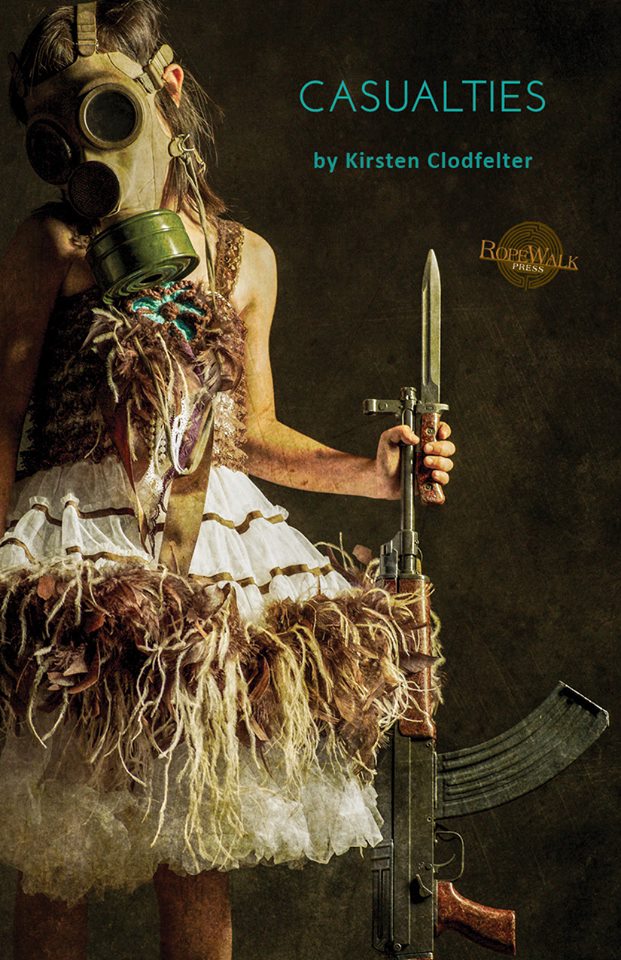 A handful of print copies of CASUALTIES are still available through RopeWalk Press.  $1 from the sale of each book is donated to the Wounded Warrior Project.

CASUALTIES can also be purchased for Kindle through Amazon, here. In keeping with the original mission of this project, 10 percent of the sale of each ebook is donated to the Wounded Warrior Project.

“CASUALTIES belongs to the tradition of home front stories, and Kirsten Clodfelter, in clear, measured prose, gives a deeply empathetic rendering of a culture pervaded by the shadow of its continual wars.”

author of I Sailed With Magellan

“The war comes home in this heart-bruised collection of stories by Kirsten Clodfelter. Bombs go off on phones, gunfire rattles at dinner tables as families try to make sense of and cling to the fathers and brothers and husbands they are losing overseas. This is elegant and powerful work from a young writer to watch.”

“Kirsten Clodfelter’s stories illuminate not war exactly, but the lives around the edges of war, and in so doing, invite readers to shed their various protections and step a little closer, a little closer, until we realize war is always right here, at our door, exhausted by our inattention. Intelligent, idiosyncratic, and humane, CASUALTIES beautifully reveals the often canted ways human beings cope with fear and desire, while at the same time negotiating the surrealities (and realities) of contemporary warfare.”

author of Contents May Have Shifted

“The five beautifully-written stories in Kirsten Clodfelter’s CASUALTIES give voice to the hidden wounded of our recent conflicts in the Middle East, challenging us to see the world through the eyes of the women left behind: a young wife both yearning for and fearing her estranged husband’s return from Iraq; the Kuwaiti daughter of a veteran of the first Gulf War longing to know the father she has never met; the Palestinian mother who imagines the Israeli mother on the other side of the border fence. These lyrical and empathetic stories trace the distances impossible to traverse by satellite phone, the collateral damage inflicted by separation and the cultural divide. A first-rate debut.”

author of The Pale of Settlement

“Kirsten Clodfelter’s CASUALTIES is a luminous examination of the personal and cultural impact of war. These stories are harrowing, elegiac accounts of characters doing what they must to make it through, cast in prose that is sensitive and frank and unfailingly beautiful. A moving and important work of fiction.”

author of The Isle of Youth